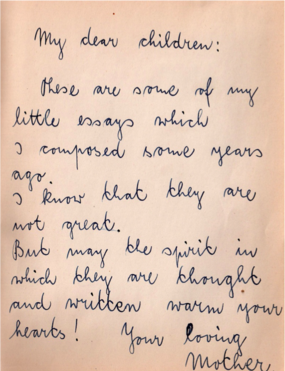 ​​​​​​Small Things: Words from My Namesake

Welcome to this book of essays written by my grandmother, Trude Grunwald, and myself.  The book may be purchased at amazon.com.

Here is the introduction to the book and the first chapter:

We set the journal aside so we could complete our clean up mission with the tantalizing promise of reading it later. Around 11:00 pm and in a state of total exhaustion, we collapsed in the living room and I read your journal aloud from start to finish. We were deeply touched by your words. You wrote in English—perfectly—and we were blown away by your expressive vocabulary, creativity, and lack of spelling or grammatical errors. We were exposed to parts of our family history we had not previously known.  The wisdom you had gained from your life experiences leapt from the pages and into our hearts.

I don’t know why we were never told about your essays. Were they forgotten? Too private? Painful? Or not something Mom or Dad thought we’d find interesting? There’s no one alive to ask now. But, instead of dwelling on these questions, I’d rather share your ideas about life with as many people as possible. In that way, you will live on—not just as a picture on my wall. Yes, my sisters wanted me to have your portrait because I share your name…and now, so much more.​

If I could share only one of your writings, it would be the essay on Thanksgiving.  You wouldn’t have even celebrated this American holiday if you hadn’t been forced out of your country.  Your husband, my grandfather, was a successful Jewish businessman in Germany.  He had fought as a German soldier in World War I and had his left leg amputated below the knee because of a battle injury. I remember when the realization hit me in high school that Opa had fought on the German side! Leaving behind your former comfortable life, together you escaped to the United States with your two children. Your expression of appreciation for what you discovered to be most important in life is a lesson for everyone.

Chapter One:
Let us give thanks!  (for Thanksgiving Day)

Thanksgiving is a real family feast. All the relatives gather around the splendidly decorated dinner table. The smell of good food raises the spirits. The wine makes everybody feel light and happy, and the abundance of exquisite dishes lets us forget all the worries. I think it is a wonderful idea to celebrate Thanksgiving in this way and I gladly take possession of this ancient custom.   But just now, at the feast of abundance, I want to express my thanks for something—which maybe—you cannot understand: I feel a deep gratitude towards my fate which took from me all the abundance of my former life and made me modest and humble.   In my old country I practically had everything I liked. I certainly felt happy about that, but I took it so much for granted as if it would always stay with me   Then the dreadful happenings befell us. We were forced to leave our old country, a country, beloved by us and our ancestors since centuries. We left, took leave from our old luxury—and a new life began. At first it was a very hard struggle. The new world was rich with disappointments. Nobody knew us. Either we had to help ourselves or we were lost. The first thing was to change mentally. We had to learn how to arrange everything in the most modest way without losing our culture, for living without culture would have been the worst thing for all of us.   But gradually I found out how wonderful life can be without having all my wishes granted, without having abundance of everything. I learned to appreciate the smallest, most unimportant things. And a new spirit fell upon me: the spirit of being grateful not for the great gifts in life but the very tiny ones. I learned the happiness that goes with everything when it is given with a full heart.   My sincerest belief and my greatest experience of my new life is: not the abundance makes the life worthy; the real joy goes with the smallest things, when they are given as a genuine sacrifice!   Let me give thanks for my experience which taught me this new attitude towards life.

​​​​​You were just a portrait on the wall. You looked so much like your daughter—my mother—but in my child’s mind, a much fancier version. Pearls around your neck, gold earrings, flowered dress. You tilted your head and made a soft, subtle smile with closed lips. Your eyes, under perfectly arched brows, seemed to hold so much.

Mom shared only a few stories about you. She referred to you as sensitive.  Not exactly a compliment coming from her because she valued toughness. She mentioned you liked to write.  She implied the move from Germany to Los Angeles was very hard on you—that you had a nervous breakdown. I remember wondering what that meant, but she didn’t elaborate. She maintained that when she became a mother herself, you wouldn’t babysit because you’d “already raised your own children,” as she put it. And, she told me how a drunk driver took your life as you walked on a sidewalk close to home; sometimes she would drive by where it happened to show me. That tragic event happened in the years between my older sister’s birth and mine. So, by Jewish tradition, I was named Trude after you.

Even though we were connected through our bloodline and our shared name, you remained just a two-dimensional entity until my early forties when your son, my Uncle Ernie, shared a journal you had written for him that spanned his life from birth to age fifteen. He’d translated it himself from German to English. Mom revealed, for the first time, that she also had a journal that you’d written for her. She explained that many German mothers would secretly record their thoughts and insights about their children and later bestow these treasures as birthday presents when they turned fifteen. She took hers to a German translator, and then I transcribed it and made copies for my sisters and me.

I thought this was so amazing because I had also been keeping a secret journal for both my daughters during their high-school years. It was an idea suggested to me by a colleague at the school where I taught, with the recommendation that I give the journals to them when they graduated. At the time, I had already given my older daughter hers; my younger daughter was still in high school and would have to wait. As I read your beautiful words, you finally came alive for me. I understood how lucky I was to have your name. I felt it wasn’t a coincidence or simply a matter of timing; I truly carried you within my life.

Mom passed away in 2009 after a decade of deteriorating health. My sisters and I became closer than ever during that difficult time. It was heartbreaking cleaning her condo and experiencing the physical reminders of the struggles she endured. Her closet held the clothes from her working days still covered in plastic from the cleaners, then stretch pants and tee shirts, and lastly hospital gowns and Depends. We were also surrounded by tangible evidence of what she cherished and gave her joy—art (lithographs by well-known artists mixed with creations by her grandchildren), music, photographs and books.

We found a portfolio hidden in her closet that had a variety of unframed art; for a moment we felt like characters in a movie making a surprising discovery. On the last day of our cleaning, we pulled down some boxes from the den closet. Inside were photographs dating back to the 1920s, my father’s high school and college yearbooks (Mom also graduated from Los Angeles High School and UCLA but couldn’t afford yearbooks), a chemistry paper that she co-authored and was published in 1953 (who knew?), and then the most amazing thing of all—a worn, striped, cloth-bound journal that we’d never seen or heard of before. We opened to the first page, and it was inscribed in your elegant handwriting:

To Stanley and Lottie on their first Wedding Anniversary, April 3rd, 1948.

The next page was a note to my parents telling them that your gift was short essays you had written some years ago that you wanted to share with them.